How It's Made: United Cutlery's Mirkwood Helm

Earlier this year, I told you that United Cutlery was working on another incredibly reproduction from “The Hobbit” movie series replicas. I just got word that the Mirkwood Infantry Helm will be here in November – just in time for that Christmas wish-list.
Silvan Elves, the Mirkwood soldiers protect the deep, dark forest of Mirkwood. They incorporated the textures and materials of their woodland home into their armor, using a color palette which would allow them to be invisible in the forest they guard. This gives their armor the organic look that is so unlike the elevated High Elves’ design of their Rivendell brethren.

The piece is first cast in polyresin.
The piece is first cast in polyresin.
The Mirkwood Infantry Helm is an authentically detailed replica of the prop helm used by the actors in “The Hobbit: The Battle of the Five Armies.” As with our other “Hobbit” reproductions, the mold for this helm was created using a real filming prop right from Weta Workshop in New Zealand, where the design originated. I believe the key to the Mirkwood Infantry Helm and the previous replicas’ intricate and accurate details is because the relationship with Weta Workshop has been formed. You just can’t get the same accuracy with a photograph of the prop as you can when you have the source item to work from. This is a hallmark of United Cutlery’s continuing level of excellence and customer service satisfaction.

The replica is meticulously hand-painted.
The replica is meticulously hand-painted.
Under the supervision of Kit Rae, noted fantasy weapon designer, the helm replica was born through an extensive process. First, a model was created through the photographing, 3D laser scanning and measuring of the film prop. Using the model, a prototype was milled and then handpainted meticulously to match the original. Rae and United Cutlery carefully scrutinized the sample to assure it was up to their standard of excellence. Then, the prototype was sent to Warner Brothers for its final inspection for accuracy before it was deemed ready to make available to our valued customers. 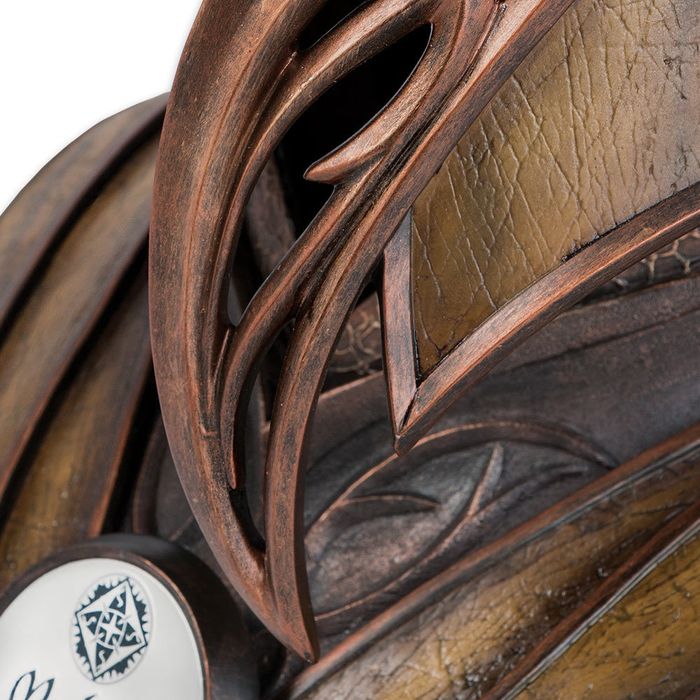 The detail is incredible on the Mirkwood Helm.

The detail is incredible on the Mirkwood Helm.
And, now, here we are. We are right on the verge of its release and I cannot wait for you to see it in real life. The Mirkwood Infantry Helm is crafted of reinforced polyresin that is colored and weathered to look exactly like the bronze-like steel and leather of the elven soldiers’ armor. Each piece will also have a display stand sculpted to look like the neck and shoulder armor of the Mirkwood infantry. Finally, as with all of our “Hobbit” replicas, it is individually serial numbered and comes with a certificate of authenticity. Just a reminder, though, once these replicas are gone, they’re gone for good. Only a limited number of them will be made. This ensures that they will retain their value as collector’s items.
“We consider our film replicas heirlooms that fans of the licensed property will cherish for many years beyond the life of the film, and as a fond memory of the world created in the film,” said Rae.
And in addition to that, I believe that these heirloom replicas, owned by fans, will give continued life to the world that was first created by J.R.R. Tolkien.