The concept of knife throwing is pretty simple. A bladed object is thrown at a target with the goal of it sticking into the target. Well, “the Devil is in the details,” and knowing the concept is a far cry from actually getting the bladed object to stick into said target. For us, that is. But for Five-Time World Knife Throwing Champion Adam Celadin, there’s nothing simpler than throwing any bladed object and sticking it every time! “From the start, it is good to gain confidence in your throwing by taking very small steps,” he told us when we asked him for some tips on getting started.

Choose Your Knife and Technique

There are three different kinds of knives which are most commonly thrown, blade-heavy, handle-heavy and balanced. The important thing is making sure that distribution of weight is used to decide which way to grip the knife. The weight must always be thrown first. So, decide whether you are more comfortable throwing a knife by its blade or by its handle and make your throwing knife choice from there. “Find whatever suits you best. Use only one set of throwing knives and one technique only. Because if you mix techniques, you will not master any single one of them,” suggests Celadin. Once thrown a knife either spins end-over-end in the air toward its target or it doesn’t spin at all and flies tip first at the target. The way it travels through the air to the target relies on the technique the knife-thrower employs when it leaves his hand. Adam has perfected the art of the no-spin throw, “My technique is a mix of several techniques from all around the world and it’s very common that, after some time, the thrower creates his own style.” 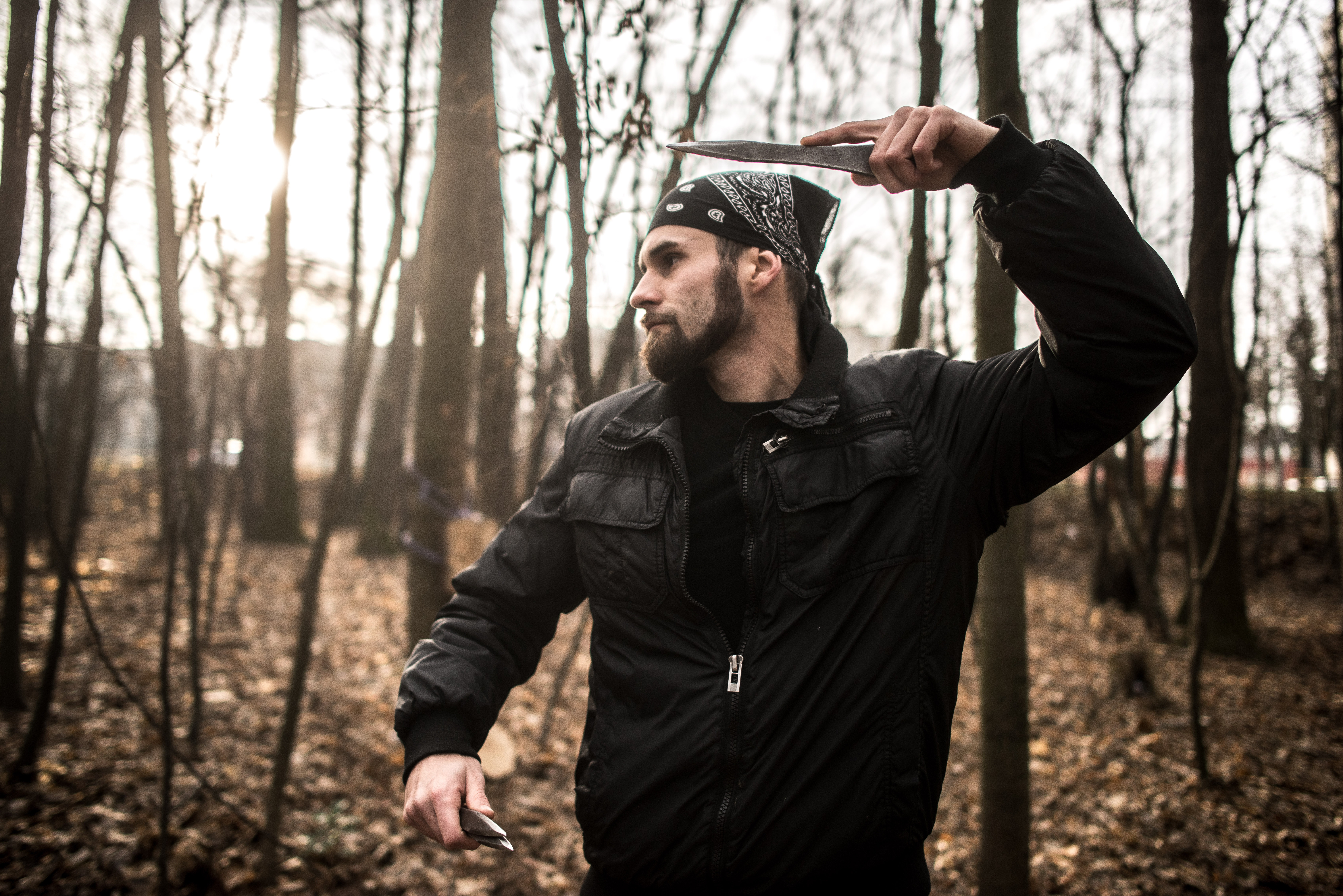 Find Your Distance And Stance

Getting a knife to consistently stick into a target depends on many variables including distance, rotation, grip and stance. One of the most important variables a beginner needs to focus on is distance because there is a “sweet spot” for each individual where the knife reaches the target tip first. Even adjusting a few steps toward or away from the target can make a difference. Distance doesn’t necessarily mean the actual distance from the thrower to the target. It means the distance the knife travels, when it flies through the air, based on whether its trajectory is more arced or less arced upward. The thrower can increase or decrease the arc of the knife by throwing the knife slower or faster. A knife arcs higher when it is thrown at a slower speed. “The important thing is to have a relaxed stance that feels comfortable for you. Some people don’t like to move at all when they throw but I like to step forward into my throw and that gives me a bit of extra power,” instructs Adam.

Choose Your Grip And Release

The next consideration is the way you grip the knife. There are two basic ways to grip a throwing knife – the hammer grip and the pinch grip. What it comes down to is what is most comfortable and successful for each individual. The Hammer Grip, just like its name says, is where the knife is held like one holds the handle of a hammer. Grip either the handle or the blade between the thumb and index finger in a secure pinch to achieve the Pinch Grip. Now, that you’re ready to throw the knife, extend the throwing arm out in a straight line to the target, then, bring the throwing arm up to a 90-degree angle, bending from the elbow, toward the chest. Make sure the knife stays extended in a straight line from the hand. Now, draw the arm up and back so that the knife goes alongside the head at about the level of the ear. The arm is swung rapidly forward and extended from the elbow in a downward motion. “Timing is everything,” aptly describes the release of the knife during the throw. When it’s released at the right moment, the knife will stick perfectly into the target horizontally. “Let the knife slide out of your hand. Don’t rush it. Always take your time before each throw. Aim, pull back and let it slide,” Adam said when asked about his release technique. Don’t expect to stick the knife on the first throw or maybe even the second throw. Do expect it to bounce off the target and slam into the ground or miss the target completely. Don’t get discouraged because, as with anything, knife throwing isn’t learned in a day. It takes practice, dedication and most importantly, patience.