There’s a new Boshin in town…
In the span of just a few years, Honshu's remarkable "Boshin" cutlery line has skyrocketed to international renown and acclaim, gaining a diverse following numbering in the thousands. From tactical cutlery fanatics to staunch devotees of ancient Japanese swordcraft, blade enthusiasts of all stripes share a common love and respect for Boshin swords and knives, lauding their unique blend of tradition and innovation, style and function. The legendary Nepalese kukri is the latest historic blade to undergo the "Boshin transformation." Just as it did with the katana, wakizashi and bowie, Honshu rejuvenates and redefines this centuries-old machete variety, adapting it to suit the unique challenges of modern combat and outdoor adventure.

Distinctive kukri profile + Boshin engineering = Blade with unequaled cutting power
The kukri has long proven deadly on the battlefield and indispensable in the rugged Himalayan highlands where it originated - even earning the moniker "the king of all knives." This is due in no small part to its distinctive inward-curving blade profile, which boosts forward momentum for unmatched chopping power. The Boshin retains this time-tested blade form, bolstering it with resilient, modern 7Cr13 stainless steel and rock-solid full-tang construction. Chic cut-outs, a menacing blood groove and a brilliant satin finish add contemporary tactical flair.

Battlefield, back country, even your own backyard - it's all Boshin country
Like its Nepalese forebears, the Boshin is perfect for chopping wood; but precision engineering and improved weight distribution impart a level of versatility that goes well beyond that of the average kukri - modern or historical. The Boshin makes quick work of practically any cutting task - from delicate jobs like fashioning a snare from twigs to rigorous chores like clearing tangled vines and dense brush. But no matter the task, the Boshin makes it quicker and easier, thanks in part to its sublime hand-feel and shrewdly designed handle.

New weapon, same legendary Boshin feel
Made of state-of-the-art TPR, the Boshin's handle is rugged, waterproof and a pleasure to grip. Ergonomic contours and exquisite texture provide an impeccable, slip-free bond with the hand, reducing fatigue and improving control. This, along with flawless balance, gives the Boshin an overall feel that defies description. No doubt about it - wielding the Boshin is truly a one-of-a-kind experience.

Unbeatable Boshin value built in - outperforms machetes priced two, three times as high
Try the Boshin Kukri just once, and you'll never settle for another machete. And why should you? Like all the swords and knives in Honshu's Boshin line, the Boshin Kukri sets a new standard - for both quality and value. No other machete at any price compares. Why work harder? Why pay more? Add the potent, efficiency-boosting Honshu Boshin Kukri to your arsenal today and work smarter - for less.


Just picked up this amazing knife after watching tons of videos and reviews. Upon opening the box I commenced to take the knife out of the thin cardboard wrap. Ouch!!! The knife was do sharp that it sliced through the wrapping and sliced my index finger while wrapped! It drew first blood! I was stunned and scared at what this knife can potentially do.. the handle felt a little bit thin but I will find the sweet spot eventually... I also bought a pair of Cold Steel tomahawks... All for protection against pit bulls that attacks do many in my neck of the woods. Believer me or not it's okay.. The weight is acceptable. I did but am original kukri from The House of Kukri couple years ago and it was as dull as a banana out of the box. Great handle though but the l rusted badly. I am happy with my new purchase!!!


Very well made, sharp right out if the box, and beautifully crafted. The handle is comfortable though it could be a bit thicker for my taste.


Just recieved this Gem from BUDK, sharp out of the box, Well Made Sheath, thinking about one or two for "Santa" giving out for Christmas, Keep up the Good Work BUDK !!!


This is the 3rd knife from Honshu that I have bought. Just like the first two knives I picked up,this knife over delivers! I definitely got more than my money's worth! This is a beast of a knife! The execution and quality at this price point is amazing. It's as beautiful as it is functional and I would not hesitate to recommend Honshu knives to anyone looking for a high quality blade at a great price.

(5 out of 5)
AWESOME Design But Maybe I Got a Factory Defect?


I gotta say this is the COOLEST looking Knife/Machete (Kukri to be exact) that I have ever seen. Awesome handle, very comfortable, and I love the sheath too. And RAZOR sharp out of the box. But much to my disappointment it literally snapped within 10 minutes of using it. I cut a little brush with it, did some chopping on some small (live) trees, and sunk it into a dead oak stump a few times, moderately hard (hard enough to get it to stay stuck in the stump, but thats it.) After sticking it into the stump 3 or 4 times, much to my surprise, the thing broke in two (Literally broke into two pieces). It broke at the end of the tang; the most narrow (weakest) part of the knife, RIGHT next to the front/end of the plastic handle. So I had the handle still in my hand, and the rest of the Kukri was stuck in the stump. Maybe I just had bad luck and got a factory defect? Or maybe I wasn't supposed to stick it into a solid oak stump? I own a few united cutlery "Honshu" push daggers and I LOVE them. And I'm not gonna let this stop me from using Honshu branded knives. Maybe just bad luck or stupidity on my part? Not sure. I'm going to exchange this for the same exact thing, and just get another one. I don't think I'm gonna drive it into a solid piece of wood again though.

(5 out of 5)
honshu delivers again


I have always been a fan of the kukri blade. Who would feel naked with this bad boy in their hand? Worth every centavo and then some!


Absolutely the best Kukri I have ever owned and well worth the price. Has a great weight and is razor sharp, another great honshu product I am very satisfied.


I ordered this a few days ago ( Monday Nigh)t - it came in Friday Morning... This Blade Is Massive -BIGGER than My M48 KUKRI, and very well balanced-everything feels "GOOD" about this Kukri, comes razor sharp right out of the box, had my Initials engraved in it, I'm Happy- This is TRULY a BEAUTIFUL Masterpiece. I highly recommend it!! I have ordered Many items from BUD K that I have researched, and so far I have been very pleased ! 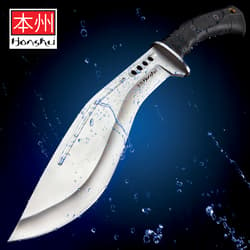