A wise, still vibrant elder in the ancient tribe of Japanese swordcraft
Sokojikara's "Senzo" Tachi breathes new life into an ancient Japanese sword that predates the legendary katana by centuries. Though little known outside niche sword enthusiast circles, the "tachi" is one of Japan's great ancestral swords - a pivotal foundation stone on which Japan's unrivaled swordcraft tradition is built, and a direct predecessor to its decidedly more famous descendant, the katana. But make no mistake - the tachi is no mere "katana prototype," and the Senzo is no exception. Like all tachi, the Senzo boasts form and function all its own - distinctive appointments, a unique look and feel and real-world combat capability that keeps pace with and often bests that of any katana. It should come as no surprise - after all, the elder tachi was slaying foes by the thousands and proving itself on the battlefield centuries before the first katana was even a twinkle in a swordsmith's eye. And though its profile, dimensions and style are largely faithful to history, the Senzo isn’t preoccupied with nostalgia. First and foremost, the Senzo is a capable modern sword built to satisfy the unique requirements of today's serious swordsman. Beneath the elaborate, historically inspired adornments is a fierce, real-world weapon that can go toe-to-toe with any of today’s ultramodern tactical swords. This deft blending of old and new makes the Senzo uniquely capable - truly the best of both worlds. A prime example: the blade, which is made a state-of-the-art modern steel alloy that’s bolstered and enhanced via an ancient tempering technique.

Modern steel + Ancient tempering technique = Baddest blade on earth
The Senzo's blade is hand forged from 1060 - one of the world’s most sought-after carbon steels; and 1060 alone would yield a blade with a nasty bite. But the Senzo takes it a step further, it’s blade beefed up with a time honored differential hardening technique called clay tempering. Unique to traditional Japanese swordcraft, clay tempering was developed centuries ago by Edo-period smiths and is key to Japan’s longstanding reputation for producing the sharpest swords on the planet.

Sharpest in the world and stays that way
Clay tempering also imparts edge retention that's simply without equal. The Senzo's clay tempered tanto blade glides through rolled bamboo tatami mats and even cinder blocks like a koi through a still pond, suffering neither crack nor fissure, all-the-while retaining its razor sharp edge. Try that with an ordinary, non-tempered blade! It’ll almost certainly result in a dulled and/or chipped edge and perhaps even a cracked blade spine or worse. Clay tempering is due much of the credit for the Senzo's ability to withstand such punishing cutting trials. Though conceptually simple, in practice it requires great skill and seasoned hands, developed by years of grueling experience.

Clay tempering still painstakingly performed by hand
Prior to the intense heat of the hardening phase, Sokojikara's expert swordsmiths coat the newly formed, unrefined blade with clay - a thin layer along the edge, a thicker layer on the body and spine. When the blade emerges from the hardening forge, the clay layers' contrasting thicknesses cause the steel to cool at slightly different rates, yielding two distinct hardness regions. The edge cools faster, making it harder for edge retention and shear strength. The body and spine cool more slowly, rendering it "tougher"- less brittle, more flexible and better equipped to absorb impact energy.

Familiar face, familiar fierce
The tachi blade's sleek, gracefully curved profile and ideal weight distribution are essentially identical to that of the famed katana. Or to state it in the correct historical order - the katana blade largely mimics the tachi blade. While the katana-esque blade is undoubtedly familiar - easily recognized by anyone who has ever seen a movie featuring a samurai or ninja character - elsewhere the Senzo diverges substantially from pop culture’s katana-centric "samurai sword" image, taking on an especially regal flair befitting the tachi’s noble history.

How's it hanging?
While both the katana and tachi were carried by samurai and other members of Japan’s ancient noble and warrior classes, the way the two familial swords were carried (while sheathed) is perhaps their most prominent distinction. Whereas the katana was traditionally carried with cutting edge facing up - typically slipped inside a waistband; nobles and warriors bore the tachi “cavalry style” - hanging from the belt, edge facing down. It may seem a minor distinction, but it made all the difference in the world to mounted samurai. The Senzo’s hand lacquered, medallion studded hardwood saya retains the traditional “ashi,” or “hangers,” that connect the saya/sword ensemble to the bearer’s belt. The ashi are crafted from handsome genuine leather, accented with polished metal insignia and braided cord. Binding the leather ashi to the saya are two equally impressive “obi-tori," cast metal bands decorated with delicate, superbly detailed reliefs. Elegant braided ito encircles the saya beneath the hanging hardware, extending seamlessly past the ornate cast metal crane tsuba and onto the tsuka, when the Senzo is sheathed. Not surprisingly, the tsuka is decked out in equally impressive trappings - genuine ray skin same, exquisitely embellished fuchi and kashira, intricate cast menuki and traditional bamboo mekugi, to name a few.

Historical sword built to last well into future
No matter your previous sword experience, Sokojikara’s distinctive Senzo Tachi is a must-have treasure - the perfect fusion of history, visual splendor and functionality. For avid collectors, the Senzo adds an indispensable piece to your mosaic of the world’s greatest swords; without it, your real-world “chronicle of swordcraft history” is missing a vital chapter. But the Senzo is so much more than a relic. Even if you’re a first-time sword buyer or have little interest in history, the Senzo is still a fantastic way to start your collection on an undisputedly unique note that’s sure to draw attention, admiration, as well as spark curiosity and plenty of lively conversation from onlookers. No matter how you intend to enjoy it, at this unheard-of value, there’s no reason to deny yourself this rare opportunity to own an equally rare sword. And with proper care, you can pass it down for your children, grandchildren or even great-grandchildren to enjoy, as well! Sokojikara’s heirloom-quality Senzo Tachi is built to be cherished generation after generation - your legacy preserved in hand forged steel!


Just received mine the other day,I have two other tachi swords one from ten ryu the other,I ordered from china.got mine with 10% off all in all it was a great price. All the fittings are very nice,I like the silver.The bamboo pins are slanted as should be,the tsuka is curved kike it should be on this sword,also the tsukamaki along with the fittings are tight,and decent quality for the price.The samegewa-rayskin on mine isn't real-but I myself don't mind, I have over 130 katanas lot of brands-munetoshi,hanwei,musashi,ryumon,ten ryu cold steel,and the rayskin seems to after time seems to shrink or crack on some but not on the imatation ray skin.The saya is very attrative,the sageo is done well.The blade I like length size,hamon,weight has some blade presence 2.5 pounds length 28& 3/8 ". Took a week for it to ship out,but all worked out in the end.All in all I have eight sokojilara katanas,when you can get one on sale they are a good deal.I haven't cut with this one yet but getting ready to cut with the last three sokojikara I have purchased from budk.Rember to only cut watter bottles,mats,or bamboo,safe cutting Ray Blundell


I just received the Sokojikara Senzo Tachi today. The sword is a piece of art! The adornments on the saiya are beautiful, the fittings are all nice and tight, and the sword is quite sharp. Tachi were traditionally longer than Katana, which is one of the main things that set it apart from the Katana but this is the same length. I'm a little displeased with that to be honest. Aside from that, I'm very pleased with the sword and would highly recommend getting one! 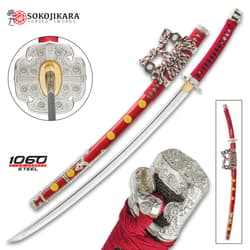