Hell hath no fury like the Sokojikara Scorn
Savage yet beautiful, tough yet graceful, Sokojikara's "Scorn" Katana is a wild animal in the trappings of a nobleman. Sokojikara developed this distinctive traditional Japanese weapon with the serious swordsman in mind. Master smiths painstakingly hand forge every blade, and seasoned sword artisans expertly handcraft the tsuka and saya. From vigorously hammering the raw, molten steel to gingerly tapping in each wooden mekugi, every step in the Scorn's construction receives the utmost care and precise attention to detail. Some of the world's - and history's - most revered techniques are employed, and every material is top-of-the-line. Add chic aesthetics and sophisticated appointments, and you've got a sword destined to be a legend.

Top-grade steel enhanced by proven differential hardening process
The Scorn's blade is hand forged from T10 - one of the most sought-after high carbon steels - and T10 alone would yield a blade with a nasty bite. But the Scorn takes it a step further, enhancing the blade with a time honored differential hardening technique called clay tempering. Unique to traditional Japanese swordcraft, clay tempering was developed centuries ago by Edo-period smiths and is integral to the katana's longstanding, well-earned reputation as the sharpest sword on earth.

Sharpest in the world and stays that way
Clay tempering also imparts edge retention that's simply without equal. The Scorn's clay tempered tanto blade glides through rolled bamboo tatami mats and even cinder blocks like a koi through a still pond, suffering neither crack nor fissure, all-the-while retaining its razor sharp edge. Try that with an ordinary, non-tempered blade! It’ll almost certainly result in a dulled and/or chipped edge and perhaps even a cracked blade spine or worse. Clay tempering is due much of the credit for the Scorn's ability to withstand such punishing cutting trials. The tempering process is conceptually simple, but in practice it requires great skill and many years of grueling experience.

Clay tempering still painstakingly performed by seasoned hands
Prior to the intense heat of the hardening phase, Sokojikara's expert swordsmiths coat the newly formed, unrefined blade with clay - a thin layer along the edge, a thicker layer on the body and spine. When the blade emerges from the hardening forge, the clay layers' contrasting thicknesses cause the steel to cool at slightly different rates, yielding two distinct hardness regions. The edge cools faster, making it harder for edge retention and shear strength. The body and spine cool more slowly, rendering it "tougher"- less brittle, more flexible and better equipped to absorb impact energy.

Experience the Scorn, then pass it on
The Scorn has proven itself time and again, and it holds its own against any of today's most expensive katana, outperforming many. But the old cliché is true - "action" does indeed "speak louder than words," and at this unbeatable, downright unheard of price, why deny yourself the opportunity to experience Sokojikara's Scorn Katana for yourself? No matter how you use it, with proper care you can enjoy it for a lifetime. Then pass it down to your children, grandchildren or great-grandchildren! The Scorn is heirloom-quality and built to be treasured by generations of your descendants - your legacy preserved in hand forged steel.


longer handle that I like for leverage, very tight and well done, the fittings are unique to sokojikara,not out of a common grab bag like seem to come with most under 200$ katanas. The Sokojikara stamp on side of blade is etched on very tastefully, The full tang needed deburing, I reversed the Suba so the warriors face would not dig into my forefinger. I practice indoors in confined spaces and this somewhat heavier and sharp Scorn helps me stay disciplined. The ray skin is very aggressive or mature also that gives the sword a very quality look


This Katana is absolutely incredible! A true work of art and feels extremely sturdy! Exceeds all expectations!!! Thank you!


Great quality sword, got a great deal on it, easily my favorite sword I own, I will continue to buy more from bud-k, they have never let me down, very reliable and fast shipping.


Now this is a quality piece of art, no "china" billboard on the blade, everything looks and feels handmade and quality, and for the price, you can't beat it, nice and light, and sturdy, would recommend.


Very nice sword! Expensive, but probably worth it! Shipping takes forever, like all BudK orders!!! 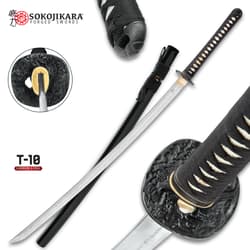