The best of the old meets the best of the new with our Kraken® Steampunk fantasy sword! This high-impact design features rock-hard, all-stainless steel full-tang construction. The fantasy cut-out design, coupled with the knuckle guard and fierce curved blade, give the Steampunk fantasy sword a unique look. The attractive pakkawood handle and accents add tons of zing and just the right amount of elegance.

Check out this video:


I’m 100% happy with this purchase. Didn’t know what to expect as far as quality, but quality was great. Glad that I decided to purchase 2.


I purchased a scratch and dent fantasy knife mystery bundle for $19.99 and i recieved this sword as one of the three sent to me. It is by far the coolest of the three and i cannot figure out why it was in the scratch and dent pile...its great, there doesn't seem to be anything wrong with it. It came very sharp out of the box and looks incredible. Thank you budk for another awesome piece for my collection!


Got my sword today and it is awesome just like the lunar sword I got I,m ready for the zombies my lunar sword in one hand my steampunk in the other also I plan to put both on wall touching blades they are both great looking thanks budk

Best knife/sword i have got, much longer than i expected. Very sharp, but it is a stainless steel blade rather that a carbon steel. The steel is still strong because it is heat treated. The one major thing i dont like is the sheath, look at all the other comments^^^ . The sheath suck but i would still defidently get it. I like it so much that i an getting the blue and silver one just like it. It shipped in 7 days which is kinda long but is worth the wait. The crimson eclipse color is awesome and it came with no scratches or dents. I love it!

It got here much faster than i thought it would and was in excellent condition. It came already sharp and will make for a beautiful edition to my growing collection of weapons.

Super badass blade. Was in good condition when it arrived and now I keep at bed side. It can be a little awkward putting it bad in the sheath primarily from the decorative nuts and the hand guard make it pretty awkward to hold, but the sheath has reformed and I have easily become comfortable handling it. My first buy made for a awesome one, too.

this thing looks even more badass up close and in person. was a little surprised by the size of it but that only makes it that much more wicked.

I am incredibly happy with my purchase of this blade. Notice I did say blade. The packaging it should come in says that this is a steam punk fantasy sword, however it is more like a knife than a sword so the team at True Swords is correct in their labeling. It is much larger than you will expect it to be, and a lot thicker as well. Over all it is a great weapon to add to the collection.

This is an absolute beauty. Very sharp out of the box, can't wait to get the other color.


Finally got my hands on this beauty! I already have the Lunar Legacy sword, so getting this was a no brainer. Sword is sharp as heck right out of the box, sheath fits it perfectly. I love the studded accents they added to it.... thinking of getting spikes to add to the Lunar now, haha. Like I said in my Lunar review, I am a long sword kind of guy, (6ft 300lb, heh heh) and these look like daggers in my hands, but EVERYONE thats sees them loves them now. Again this sword is very light feeling (to me) but SOLID as all get out, but thanks to the studs this is a slasher not a chopper. Cannot wait to see if they make a third/fourth variant of this beautiful design. Thanks again BUDK for a beautiful, but VERY functional, collectable!


This is a fantastic variation on the Lunar Legacy sword - the addition of the studs on the guard and the blade is a great idea. If you have the Lunar Legacy sword, you'll want to get this one too. Also, if you're tired of the many thin, sometimes wavy, black stainless steel swords offered here, try this one. It's thick, straight as an arrow, with a heavy, durable sheath. I doubt you'll be disapointed.


This sword is great I couldn't believe how sharp it was right out of the box. I will definitely be purchasing from Budk again very soon. Thank you Budk.

An interesting series of events that led to this purchase.<br /><br />Last week I had purchased the other version of this knife, the blue and silver, called Lunar Legacy on other websites. I was going to type up a review of it, but after seeing this new one, figured I could just talk about them both here, at once. Plus, if anyone looks at the other knife, it's likely they'll look at this one, too. Or the other way around.<br /><br />A while after the Blue Knife arrived, I began to wonder what the wooden fittings would look like if they were red. Sure enough, a few days later, this beast pops up on the home page. I had to have it, and it just arrived yesterday.<br /><br />It feels strange to call them knives. When the Blue Knife first arrived, I was blown away. Not only is it beautiful, it's frickin' huge! The pictures don't do them justice.<br /><br />Their almost absurd size aside, they're light and swinging them feels good. The handle might take some getting used to, but that may just be me and my small hands.<br /><br />The wooden fittings on both are study, secured tightly, and I can't even begin to describe how awesome the wood looks in person. To me, the pictures make the wood look kind of glossy, but they're not, really, if you're expecting that.<br /><br />Color-wise, the wood is a bit different than the pictures. The Red is brighter, which I like better, and the Blue is a bit darker.<br /><br />They both came fairly sharp, even the piece that juts out above the guard is sharpened. The Red came considerable more sharpened than the Blue. That doesn't mean the Blue is a laughing matter, though. Sharpness may vary between individuals, however, but either way, you want to be careful with any bladed weapon.<br /><br />Some people say that they're fantasy blades, but personally, I get kind of a futuristic/Sci-fi feel from them.<br /><br />tl;dr Both the Red and Blue knives are incredible, easily the most unique blades in my ever-growing collection so far. They're sharp, sturdy mean pieces of steel. If you get one, I recommend getting the other, they look pretty good together.<br /><br />Oh yeah, and the studs in the Red Knife are a nice touch. You can find the same ones online or in a hardware store if you're interested in giving the Blue Knife the same treatment.


I love the sword however the sheath is designed for left side / left handed carry and use (as pictured). For the majority of us who are right handed this is an issue.

This knife is a ton of fun to use. The sheath is horrible and barley held together after like 3 uses. If you want to see a video demonstration go to my youtube channel PretzelNugget- Full Tang Fighting Knife Test

The blade itself is a lot heavier then expected and about the weight of any other of my single hand swords. The blade came vary sharp to where it even broke the tip guard, worth the 20 i paid for it buuuuut, the handle is far bigger then i expected, well the entire blade was for that matter the sheath sucks. it's leather but it doesn't fit the notches of the blade right and the crimson wooden trim on it won't fit properly within the grooves of the sheath. The wood, being of a decent design grade, has the crimson pain fading in meany parts, it looks like it was stained longed ago without being properly sealed. The wood doesn't feel sealed either and the crimson stain is alot lighter then i expected. I expected a deep red like in the picture, but mine is a variation of regular red and lighter tones and wood underneath the stain. Its good if you want to bring a sword to a knife fight but some of the little things threw me off. Worth $20 but not $25, sense i have to pay an extra $20 dolor shipping... yaaaaay


Sword is not sharp, You would have trouble cutting paper with it. Very Disappointed. Was going to get the Lunar Legacy, But not sure now. The Bolt cap's on the sword in the picture show it is silver in color, mine is copper in color does not match the blade at all. VERY DISAPPOINTED.

Nice blade, but some of the wood was chipped. The sheath is extremely poorly made, already falling apart and some of the buttons are rusted. Tough to get the blade in as well, as the blade seems to get caught on the sheath.

Showing 3 out of 20
Thanks! This item is in your Cart.
Kraken® Steampunk Fantasy Sword With Sheath
Engraving:
0 Item(s) in Your Cart
Subtotal: $0.00 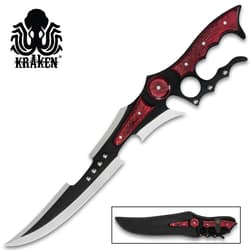