Product Is Unavailable For Purchase

These are the meanest twins you'll ever find! Each of these stunning swords features a 24-1/2" 440 stainless steel blade with an eye-catching two-tone finish and a unique shape. The stinger-shaped handles abound with detail and provide a secure grip that will allow you to wield them both like a modern-day ninja! Individual shoulder harness sheaths allow you to carry them on each arm. 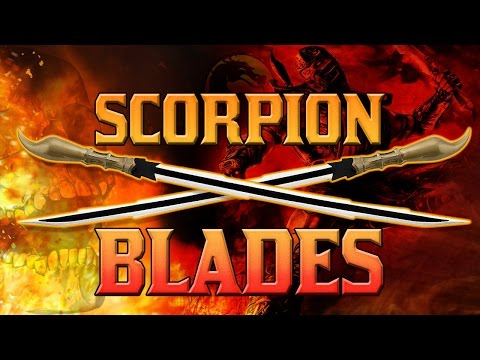 
The Swords were great but tips came bent.

(4 out of 5)
Excellent quality


The swords are perfect and exactly what I expected, however, the sheathe is too long for the blade itself and leaves a descent amount of space between the blade tip and the sheathe tip.


Just need to sharpen A little, then, it will cut


I bought 2 sets of these for my friend and for myself. As soon as we got them we couldn't have been happier. The swords are freaking sweet. My only complaint is that the sheathes don't really fit me, they fit my friend but one of his swords cut through the sheath. Overall I'm extremely happy with these


When i unboxed the swords the tips of them were bent.
Response: We apologize for the condition of the product you received. This is unacceptable and we'd like to make it up to you. Please contact customer service at 866-246-7164 and we will refund you the purchase and shipping amount or we could send you a replacement if you'd prefer. We are truly sorry for this inconvenience. Sincerely, BUDK Customer Service


These swords are awesome, they are almost identical to scorpion's swords from Mortal Kombat X. The blades are a little different but when I'm slicing through water bottles at lightning speed, you can't even tell. Thanks BUDK for these awesome Scorpion replica swords at an unbeatable PRICE!

Great look! But not sharp at all.

these have some weight to them. they seem solid, but i'm not intending to swing them at anything overly sturdy.. like a tree. the sheaths are nice, with a strip of velcro in the middle. i am not certain if i like that the sheaths are connected together by the straps.. i could cut one end of each strap and sew them together to make single sheaths, if wanted later. i don't know why the did not use a clip mechanism. i got mine on sale so that made them that much better.

THESE ARE DISPLAYS PRIMARILY!!! I bought these swords back when I thought the only important factor in buying a sword was how cool it looked. Being a bit less stupid now, I've decided to write this review to help future sword-swingers like myself. First, look at the metal used to make the blade. Stainless steel, of which these blades are made, is very nice for display swords, as it does not lose its luster. However, it is terrible for actual swords, as it is very soft due to a rather low concentration of carbon. Optimal blades are made of 1060 carbon, or 1045 or 1090 carbon, though 1045 is a bit softer and prone to bending, while 1090 is more rigid and thus more likely to shatter with misuse. Anyway, these blades aren't high carbon, and thus not at all recommended for actual use.<br /><br />Perhaps more importantly, the hilts are of a of very uncomfortable mould, and are made of ABS plastic. While I was able to look past the stinging corners of the grips, the plastic was a fatal flaw for me, as the hilts of both swords snapped in my hands after a few good swings, because ABS plastic is too weak to take the force exerted on it by the tang of the blade when the blade makes contact with anything.<br /><br />These swords are fine display pieces, though there is no included method of display other than the sheaths, which conceal the coolest part of the swords, and get a 4/5. As real swords, they get a 2/5. They don't get a 1/5 because i still use one of them, as enough of its hilt remains that I was able to wrap nylon cord, duct tape, and packaging tape around it to fashion a makeshift hilt that is actually more comfortable than the original; whenever the blade bends, I just bend it back to a (somewhat warped) semblance of its original shape.<br /><br />Cool to hold, cool to show, bad to use, remember to oil them.

I am a very advanced mixed martial artist, and have a big collection of many weapons, then I really wanted these swords for many reason, and I got these swords some months ago. These swords are really nice and are great in length and weight, and are also very strong. Although they came very dull, one being about 3/4 of an inch shorter then the other, and a very tiny bit more thinner in width, they are very worthy swords. I suggest training with them dull first, then when you get the feel of them sharpen them to your liking. That's what I did at least, and they came pretty fast in the mail too.

These blades look so cool! It seems like it is going to suck when trying to sharpen them though. I hope my friend likes them!

At first I had a few concerns about this set, but after a phone call, I realized how great of swords these are, I'd recommend them.

Awesome swords. Very intimidating, only issue would be the handles aren't too comfortable. All in all, very good swords.

this is not the best handle but its still awesome

These are for display , not really sharp. Ok for 35$ , but really they are wall hangers. You could sharpen them up I guess , handles are ABS plastic .

beautiful replica of Scorpion's swords from Mortal Kombat. the handles are a form of plastic that is painted and the color is already coming off near where the blade starts and already has a few scratches. other than that, this sword is amazing! the blade is not sharp but the tip, all the barbs, and the tip of the handle are pretty sharp. the sheath is...decent but i don't trust it, they are held together with velcro and you can't quickly pull them out from off of your back. if you are a Mortal Kombat fan, or a fan of interesting looking weapons, i suggest you get this.

I guess it's my fault for being ignorant when it comes to the material ABS. I was thinking it was a type of wood/hardwoord or something, so I was a little taken off when I got these swords. That being said, I love them! Sturdy, well made, beautiful hilt that looks like a stinger. These are two-of-a-kind! Amazing blades that are certainly unique, and stand out against all of the other swords in my collection. I think my friend will love it, that is if she likes swords like she says! XD <br />All in all another beautiful, quality product. Thanks TrueSwords, you never cease to amaze me!

Scorpion stinger just came in today and I'm very much pleased with my purchase. The unique hilt and one of a kind (in this case two of a kind) blade are remarkle feats of craftsmenship. It's VERY SHARP and very light so CAUTION is STRONGLY ADVISED.<br /><br />----<br /><br />True Swords reply:<br /><br />Thank you very much for your business and interest in our product line. While shipped unsharpened, the edges appear highly aggressive in person and can be honed to a sharp edge depending on your usage needs. The blade's tanto point and the pointy "scorpion barbs" along the edge are sharpened.

These blades came exactly as stated in the description. They were not sharpened, as stated, other than at the tip, which is to be expected. The stingers on the end of the blade could get you, if you aren't careful, in the wrist/forearm, but its not much of a worry. The sheathes are great in quality. The only grievance I have is that one of the backstraps on the sheath had a little twist, but nothing to worry about, as it is an extremely easy fix for me, and it was probably just an accident in manufacturing...we all have one of those one in a while, don't we? <br /><br />Overall, I am satisfied with this purchase, and intend to buy more blades from this site. I highly suggest that you buy these too if you want a good set of twin blades!

Thanks! This item is in your Cart.
In Stock - Ships Today
Quantity 0
Price:


Get more and have all for each!

item(s) in your Cart
Subtotal:
Thanks! This item is in your Cart.
In Stock - Ships Today
Quantity 0
Price:

item(s) in your Cart
Subtotal:
Don't forget this related product!